Cary is now playing his own guitars, constructed here in his workshop in Hobart,Tasmania.

The story began in the Christmas holidays of 2010/11. My friend, Strato Anagnostis, came to visit me with a beautiful classical guitar he made in his workshop.  Strato is the founder of The Australian Guitar Making School. As a player, I have always been interested in making a guitar of my own. So we hatched a plan for me to visit him later in the year and over a two and a half week intensive time, I made a 7 string double top classical guitar. It was full on, working till all hours to get it done and the end result was fantastic.

Not only was I happy with the sound and quality of the instrument, but working with fine tools and developing my woodworking skills was an experience I will never forget. The process was also extremely meditative except for the bits where I made a mistake and then had to rectify it. As Strato says, ”nothing can’t be fixed when you’re working in timber.”

Since then I have constructed 3 more guitars and 4 ukuleles. One of my two favourite guitars now is the one I made from Huon Pine. Many people thought I was crazy for using this timber and not the traditional Spruce. To my mind, I have proved them wrong because the resulting instrument has a really rich, mellow sound which is perfect for my playing. My other deviation from the norm for an archtop guitar was to make the sides deeper which I think resulted in a more acoustic sound. This is the one I recorded my new CD “Salamanca Saturdays” on.

My other favourite guitar has a Huon Pine top but with the most beautiful Blackwood back and sides. It’s a little more resonant and “steely” in tone than the other archtop. 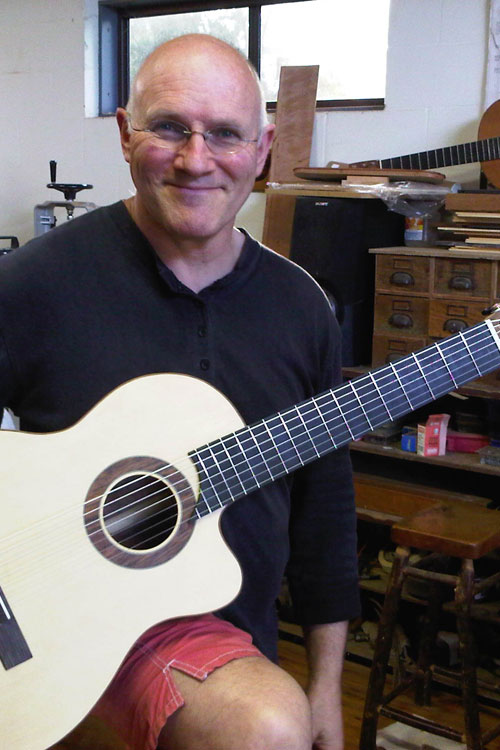